With a population of approximately 29,000 residents, Los Altos was developed with the concept of a “park in every backyard.” Los Altos began as a commuter town with the Southern Pacific Railroad connecting it to Los Gatos and Palo Alto using steam train service along what is now Foothill Expressway. The town flourished as an agricultural and commuter town throughout the mid-1900’s, and was eventually incorporated as a city in 1952.

Originally an agricultural community, Los Altos is now an affluent commuter town in Silicon Valley, most of its growth taking place between 1950-1980. Los Altos has commercial zones, strictly limited to the downtown area, as well as small shopping and office parks lining Foothill Express and El Camino Real. Los Altos features a quaint downtown that serves as the gathering spot for all the local residents. During the summer months, the city sponsors movie nights downtown and each year there are multiple art, wine, and beer festivals that bring in residents from nearby Mountain View and Palo Alto.

The 94022-zip code includes North Los Altos, and this area is located closer to the downtown business district. North Los Altos includes many of the original historic estate homes within the community and includes some of the larger and more expensive new construction homes in the area.

The 94024 zip code includes South Los Altos, and much of this area homes were built during the 1960’s building boom. South Los Altos Homes are typically on quarter acre lots 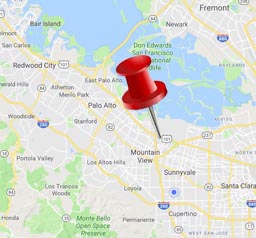